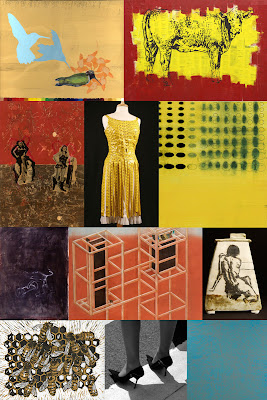 This weekend the Rockford Midwestern Biennial show opens at the Rockford Art Museum. I'm pretty excited for this one.....Matt has a piece in the show, and its hung in the most prominent spot in the museum. "Golden Calf" is the first thing visible as you enter the main gallery. Matt and I got a sneak peak of the show the other day and he snapped this picture on his IPhone. "Golden Calf" was also featured in the Biennial promotional material. Its on the RAM website and promotional poster and even made an appearance in the Rockford Register Star Go section. Hopefully all of this publicity means that its an award winner. Fingers are crossed! 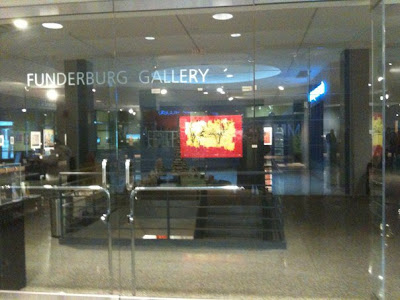 The Midwestern is a juried exhibition that features work from nine Midwestern states including Illinois, Iowa, Wisconsin, Michigan, Missouri, Ohio, Kentucky and Indiana. Besides Matt, there are several other artists I know that have work in the show. Megan Klazura, a 2004 graduate of Boylan and a student in my first ever Art 4 class created "Two Face" the red and brown piece on right of the photo collage above. The work to the left of Matt's cow, entitled "All That's Left" was created by Amy Sacksteder who was my brother's girlfriend at Boylan!!! Rockford is such a small little world. 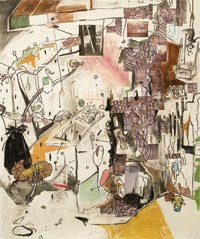 Katie Bell, has 2 huge mixed media pieces in the show. "Sink", seen above, is also featured on the website and in RAM print material. Katie was also in my first ever Art 4 class. Its so neat to see mature work from former students.
I could go on....There are several other artists I know in this show. That's what happens when you grow up and live in Rockford. I really recommend check out this show while its up. The work is current, thoughtful and engaging. The show opens to the public on Saturday, January 23 and runs until April 25. Go! Now! And tell me what you think.
Posted by Unknown at 4:55 PM