My Show Was a Bust. Now What? 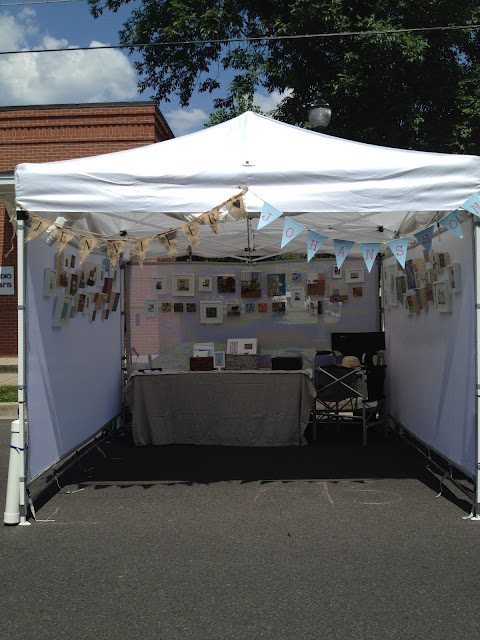 I spent the past weekend at an art fair in Paducah, Kentucky.  My parents drove 6 hours down to assist me.  It was 3 hot days...I mean hot 90 degree days!

On the first day, I sold one original work, one print and one set of cards. It was a short day, only 5 hours, so I was OK about my lack of sales.  I still had the whole weekend ahead of me. Day 2 was heartbreaking. In the first 7 hours, I sold just one ten dollar print....Even though I know I shouldn't, it's hard to not take that personally, especially when the ceramicist next to me was selling. The jeweler too. I had a little more success on Day 3 of the fair, but in the end, after booth fees, gas and other expenses were accounted for, I lost money on the weekend.

I know my lackluster sales have little to do with my skill as an artist. I've done enough shows to know that there are always ups and downs.  The turnout at the festival was weak. Heat surely kept people at home. My booth was at a dead end, and I feel like I often got missed. People in general were not buying much. Many of the other artists I talked to said sales were few and far between for them as well.


On the positive side, I did get plenty of positive feedback, sold an original that I completed just a few days before the show (guess I'm on the right track with my current work!), made some good contacts and have a possible commission.  Matt and I also made fast friends of the improv troupe that were our neighbors at the fair, and we hope to hang with them again sometime in the future. I got to spend the weekend with my parents, who were great sports during the long, hot hours of the show. I really couldn't have managed setting up without them on Friday! (Matt had to work.)

So yes, some good did come from this show, but still I can't say this bust doesn't get to me.  I wonder if I should be making something more functional. (The jewelers and ceramicists reported much higher sales and also took 5 of the 7 show awards.) Is it fiscally worth it for me to do shows? (Yes, I know this is just one show, but I do think this way.) Matt wants me to upholster chairs in the fashion that I create them in my art...Should I try?

I don't foresee myself ever becoming a jeweler or ceramicist and without some instruction, I don't have the skills for upholstery at this point. My passion is for "art", so that is where I will remain. I'm not going to give up, but I will think twice about doing this particular show again and guess I just have to keep on trying.

So creative types, how do you get yourself going again after a setback? How do you build up your confidence again?

In the meantime, do patronize my Etsy shoppe. I will be posting new prints, cards and orignals shortly.