Thursday already! My, this week has flown. I've been trying to savor my last little bits of summer as I head back to work on Monday.

As the school year begins, my to-do list lengthens and sometimes that makes it hard for me to sleep. I can't seem to get my mind to turn off. That's exactly what happened on Tuesday.

After fighting sleep for several hours, I got out of bed at 3:00 AM and went into the studio to get on the computer. Out of the corner of my eye I saw something moving in the hallway. I got up and found a BAT flying around my bedroom!!!!

I don't really know what happened next, but I did manage to get it out of my bedroom and into the studio, closing the door behind it. I just was too freaked and too tired to deal with it at 3:00 AM.

When I got up in the morning, I slowly opened the studio door to look for the bat and hatch a plan to get it out. It was nowhere to be found! I looked in the closet, under all the furniture, behind the blinds and could't find it. Not knowing where the bat was made it even worse! Was it going to pop out and bite me when I least expected?

The day went on and I started to almost forget about my furry intruder. I was in and out of my studio all day and even thought that maybe the bat had gotten out somehow. Well, I wasn't that lucky. While I was sitting at my computer, I heard a scratching noise, and realized it was coming from behind a large painting I have hanging on the wall. I bravely peered behind the stretchers and found that blasted bat! Now I had to get it out!!!

I took the screen off the window in hopes I could direct the bat out. I got a broom and swiped at the bat. It fell on the floor and just laid there, all curled up. I poked at it with the broom again, trying to get it into a bag. Thats when it came to life. The wings unfurled, it hissed and snarled at me, showing its creepy little teeth. (I'm sure the neighbors heard me screaming bloody murder at this point.) I wacked at the bat with the broom trying to stun it, as I know its illegal to kill bats now. But it still hissed and showed those fangs. Instinct kicked in and I wacked and wacked and it still hissed and came back for more!!! Eventually the bat latched itself onto the broom and I was able to pitch it out the window.

When I went outside to put the screen back in, I found my uninivited guest on the ground just below the window. Don't worry, it wasn't dead and it was gone after a few minutes. I did manage to snap a picture for posterity before it flew off. Ewww! 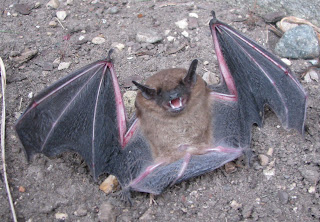 Email ThisBlogThis!Share to TwitterShare to FacebookShare to Pinterest
Labels: back to school, bat, house, life, summer